California is the fourth largest oil producer in the country. As we speak, almost 81,000 wells across the state are churning out oil and gas or being used to inject wastewater back into the ground. For every three of those wells, however, there’s another one well that’s not doing any of those things—and yet they, too, can deteriorate and contaminate the air and water over time. Now, a new state law aims to prevent those hazards. When you picture an oil company CEO, Chad Hathaway may not be who comes to mind. The father of three looks young. He’s built like a football player, and has the energy of a college student. He started his company, Hathaway LLC, shortly after graduating. “I started the company from scratch,” he says. “I borrowed $5,000 from my mom, who was a schoolteacher.” Now, he operates a few hundred wells in Kern County. On a warm spring morning, he takes me to some on a sandy, scrubby plot of land in the Fruitvale oilfield just outside Bakersfield. He gestures to a handful of oil derricks dipping in the distance. “These are called pumping units, with the horse head going up and down,” he says. Then he points to a few metal valves jutting out of the ground, unmoving and inert. Those have a name too: Idle wells. They’re not active wells, currently producing oil, but they’re not permanently plugged and abandoned, either. That would involve filling them with heavy mud and cement so they could never be tapped again. Hathaway says idle wells are in limbo, assets ready to be reactivated when they can turn a profit. “It all depends on the price of oil,” he says. Indeed, after oil prices plummeted in 2014, California's tally of idle wells jumped by 10 percent. 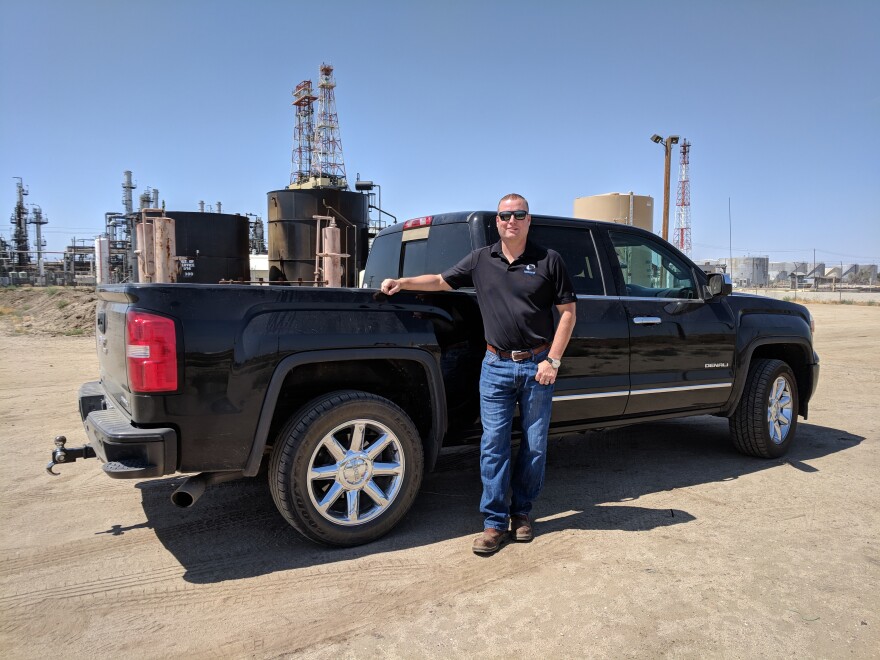 Some wells may lay idle for decades. So capping them is a careful business. “These wells are heavily bolted up and sealed off,” Hathaway says, gesturing to the idle wells on his property. “That wellhead can withstand 3,000 pounds.” But nothing is foolproof. California has nearly 29,000 idle wells. And they can be risky—environmentally and financially. Even minor leaks of oil or gas could have a lingering impact on groundwater and air quality, and permanently sealing them can be costly.

That’s why a new state law tightens idle well regulations. It aims to reduce the number of idle wells over time, and to detect problems earlier. And although Hathaway doesn’t agree with every provision of the law, he says generally, he says he takes the underlying environmental concerns seriously. “Absolutely,” he says. “We’re in California, and not just that, but we live here. This is my community, these are my friends, these are my neighbors.”

For a few months in 2016, an idle well in Bakersfield leaked a bubbling mix of fluid and steam. A decade earlier, an earthquake disrupted an idle well in Ojai. It leaked as much as five barrels of water per minute for months.

But blowouts are extremely rare. In the southern San Joaquin Valley in the 90s and early 200s, less than two percent of blowouts occurred with idle wells.

Still, Stanford earth scientist Rob Jackson says the risk is high enough to make plugging them worthwhile—especially because almost a fifth are at least 20 years old. “The longer they sit unused and unattended, the more likely you are to have a problem.”

California’s oldest has been idle since 1899. Small-scale leaks can pose problems, too. Civil engineer Mary Kang of Canada’s McGill University studies emissions from abandoned wells which, unlike idle wells, are considered to be permanently sealed. And yet, in Pennsylvania, she found that over time, small leaks from abandoned wells became a significant source of the greenhouse gas methane. “If you just look at the rate per year, it’s relatively small compared to active wells,” she asys. “However, there is evidence to show that they have been emitting for a long time.”

Over two-thirds of California’s 29,000 idle wells are located in the San Joaquin Valley. Many are located in neighborhoods and near schools. The largest owners, no surprise, are megaproducers Chevron and Aera.

The law, Assembly Bill 2729, forces new rules on oil and gas operators. Starting in January, it give sthem a choice: Either pay an annual fee per idle well, or plug and abandon a fraction each year. It also mandates more frequent testing of fluid levels and structural integrity.

“It’s the industry being accountable for the liability of idle wells that they have,” says director David Bunn of the California Department of Conservation, which oversees the state oil and gas regulating agency known as DOGGR. He says he hopes it drives operators “to seriously evaluate: If they don’t have plans to use those wells again, then they should go ahead and plug and abandon them properly.”

The law increases bonding requirements, too, so that if a company goes out of business, the state won’t get saddled with taking care of its wells. Since 1977, DOGGR has spent $30 million plugging so-called orphaned wells.

Rock Zierman, CEO of the California Independent Petroleum Association, agrees it’s important to minimize the risks of idle wells. But he worries the financials could break some smaller producers. “It considerably increases the cost of doing business in California,” he says.

But to Bill Allayaud of the non-profit organization Environmental Working Group, AB 2729 is a welcome change. He says this and a few related bills mark a new era for the regulating agency DOGGR, which he believes used to be too cozy with the industry. The law is “music to my ears,” he says. “After looking at DOGGR for these years and seeing how little they were doing in terms of regulating the oil industry, here was DOGGR saying, ‘you know what, we’re going to do a better job of enforcement.’”

In Bakersfield, Chad Hathaway agrees AB 2729 is a change of pace for the state oil and gas regulator. “It kind of put some legislative teeth behind [idle well regulation],” he says—“more so than what was before under just the public resources code.

Unlike Allayaud, however, he doesn’t think DOGGR was ever too close to the industry in the first place. *A previous version of this story named California as the third largest oil producing state in the United States. As of 2017, it is the fourth largest.